The Cajun Company has been playing traditional Cajun music for over 14 years. They play this music the old timey way, in the spirit of early Cajun tradition, with all the raw edges and emotions right up front. They maintain the basic instrumental setup of the 20's and 30's: accordion, fiddle, acoustic guitar and 'tit fer. They're digging for the roots of Cajun music and as such they delve back through dancehall classics, rare fiddle tunes and old Creole songs. Led by Bas van der Poll, one of the most acclaimed accordion players outside of Louisiana, the Cajun Company's solid acoustic sound has earned them a place at the top of the European Cajun scene. Over the years they have performed at every Cajun festival in Europe, toured in Louisiana many times to perform at the Cajun Awards festival in the Blackham Coliseum, Lafayette, in the Liberty Theatre in Eunice and at the Festivals Acadiens, Lafayette. 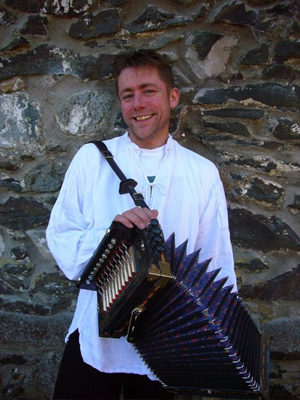 Brand new Cajun all star band formed in 2010 by renowned accordionist Gavin Lewery, the band is inspired by the Cajun sounds of the 1940s and 50s and the Cajun greats like Aldus Roger, Pee Wee Broussard.. The band features an international all star line up, with some of the finest Cajun musicians in Europe. 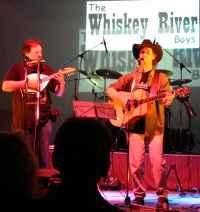 Firm festival favourites, the versatile musicians/vocalists "The Whiskey River Boys" are in reality Martin and Aidan from the UK zydecajun band "Whiskey River".  They play Louisiana swamp music from the Deep South plus Old Timey, Bluegrass, Country-Blues and whatever else they fancy... and they play with a genuine passion for the music. They perform in the UK and elsewhere. Meet them at their friendly and inclusive jam sessions in the festival bar for singing, dancing and playing. You'll have a good time just listening, but more so if you JOIN IN. 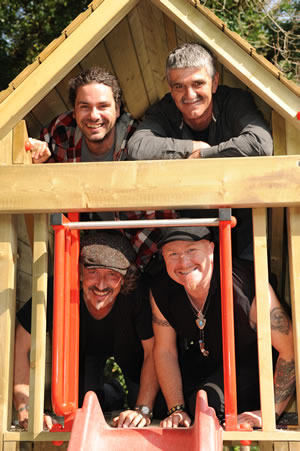 From Holland and for first time in the UK, ZydeGoNutz bring their unique musical gumbo stew to the good City of Bristol. Taking Fernest Arceneaux’s famous quote as their benchmark – “anything, if it’s done right, can become Zydeco”- they are guaranteed to get the weekend party pumping. For the past couple of years they have been raising a storm over in the Lowlands with appearances at major Cajun, Blues & Jazz festivals, and their debut CD “Havin’ a Good Time” has been selling well and getting rave reviews in Dutch music magazines and national press. The line-up consists of Ad van Emmerik, (guitar, harmonica, mandolin, vocals, rubboard); Wolfert Jumelet (accordions); David van Dinther (bass, vocals); and ex-pat Sam Murray (vocals, drums, guitar).

For a preview of what to expect visit the ZydeGoNutz Website 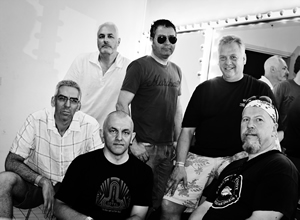 Formed in the dim and distant past of 1993, in Stoke-on-Trent, Elvis Fontenot and the Sugar Bees have evolved through many line-ups changes to become the premier European swamp’n’roll outfit that they are today. The line up of Nick Barber (Accordion/Vocals/Frottoir/Mandocaster) Paul Asher (Accordion/Fiddle/Mandolin/Bass) Phil Butler (Rhythm guitar) ,Craig Beverley (Lead Guitar/Vocals), Stuart Duthie (Bass/Harmonica/Vocals) and Chris Plimbley (Drums) returned to play in Louisiana and Texas in 2007, after previously playing at the French Quarter Festival in New Orleans in 2003 and 2005. In 2006 and 2009, they were crowned “European Zydeco band of the Year” and have invited back to the Kilkenny Rhythm and Roots Festival in Ireland on an unprecedented three occasions. They’ve also been played on the BBC by Andy Kershaw and Mike Harding and have been on TV in Austin, Texas and featured on radio stations across America and also in Australia.  Expect an infectious good time! 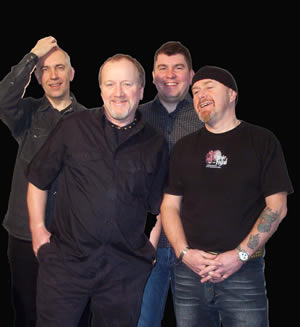 The Bearcats are a traditional Cajun band with a reputation throughout Europe as the band to see when it comes to authenticity and an ability to put smiles on faces and feet on the dancefloor. Equally at home in concert
or dance situations they have become many peoples first choice for Cajun music, combining skilled musicianship with depth, knowledge, sensitivity and soul. The line up features Chris Hall - Cajun accordion, vocals. Mitch
Proctor - fiddle, vocals. Murray Brailsford - guitar and Sam Murray - drums.
This combination of some of the best-known Cajun musicians in the country
makes them one of the most sought after outfits in their field for venues
and festivals looking for a high quality band who can really get into the
heart of Cajun music! 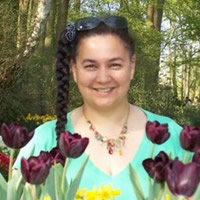 Carol Wilson first discovered Cajun dancing in Los Angeles where by chance she saw CJ Chenier in a bar and to her amazement young couples got up to dance together! Since then she has made regular trips to Louisiana. As the drummer in the Cajun band Zigazag she has studied Cajun music and played with some of the top musicians there. Over the years Carol has also watched the changing nature of their dances. She has refined her own techniques and has taught at a number of festivals and classes throughout the UK and Europe. Carol aims to make her classes simple and accessible to all because “Dancing should be about having fun and enjoying the music.” 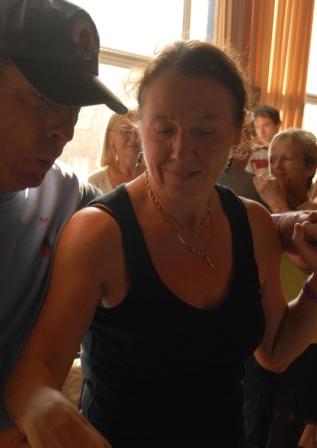 And last but not least:

Back to the top